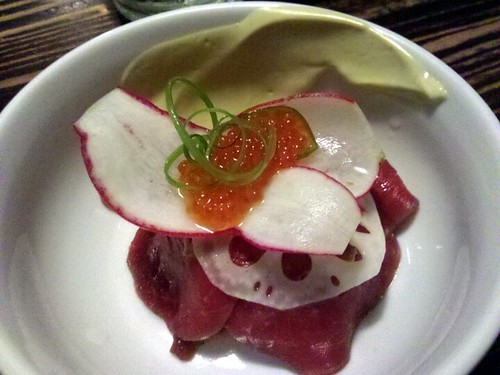 This past Monday and Tuesday marked round #2 of the fantastic BATON Supper Series, a sort of subterranean dinner club series that kicked off last month.  If you’ve missed my past posts on BATON, here’s a little catch up for you:

Moses Archuleta, of Deerhunter fame, and Bryson Tedford are the organizers of this monthly endeavor; and, the duo hosts these two night events at Gato Bizco Café in Candler Park.  The club is intended to run the last Monday and Tuesday of the month [dinner #2 was delayed a week on account of the holidays].  What’s particularly cool about these dinners is that Tedford and Archuleta work with chefs who hail from outside of Atlanta.  So every month, not only do you get different food from a different chef, but you get something you won’t be able to get elsewhere in the city.  Party!

Okay, so the October premier featured the M. Wells gang from NYC and was built around black pepper as the central ingredient.  It was awesome … you should read about it.  To pull this Fête du Boeuf off, nabbed Tien Ho, a congenial chef who recently left his position at Momofuku’s Má Pêche in New York City.  For realz people – this guy has skillz!  Dinner … well it rocked. 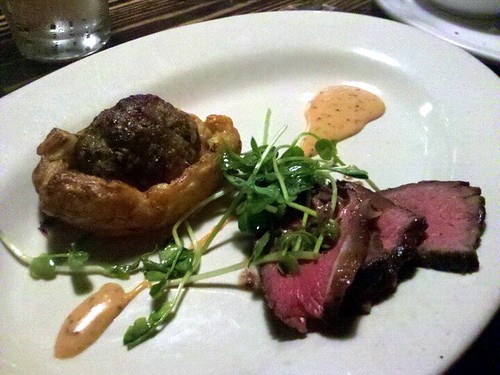 These are organic events, they seem to come together in a “what’s right for the time” sort of way.  I don’t mean Tedford and Archuleta are disorganized … I just mean that they are still feeling out how they want this thing to grow.  For example, the first dinner was à la carte, Ho’s dinner was prix fixe ($60 + whatever beverage service you chose).  Seating for the first dinner was a bit looser, this time BATON did specific seatings so that dinner service was turned a few times both nights.

I think it’s also important to understand that the dynamic of these events should change one’s expectations.  While a visit to a traditional restaurant should certainly be a fun adventure, dinner clubs are much more focused on the entertainment value.  A restaurant should offer you a particular cadence and a slickly organized procession of your evening.  These dinner clubs, at least the ones that are really good (which BATON certainly is), focus much more on an open flow and the fun.  We’ve so far been lucky enough to have to bad ass meals from BATON, but again – this is like going to a person’s house.  Framing the food against the backdrop of consistency or nuances of the execution isn’t important … it’s important that you sit, you savor, and you enjoy.

I’m not interested in recapping each detail of the meal.  I don’t think it benefits anyone and more importantly … I had my attentions on the woman who was kind enough to join me! [SCORE ONE FOR BUDDHA!!!! YAAAAAY]. 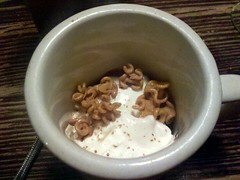 Tien Ho hails from Vietnam by way of Houston, he’s young … he’s energetic … and he’s got a lot of playfulness in his menu assemblies.  His food, though distinctly Asian, is a mix of tricks and borrows from several areas of the globe.

This meal, entitled Fête du Boeuf (which if my French serves me … it means Festival of beef), was a pleasing engagement of bite and expectation.  The oxtail crostini was rich and the “spiced ketchup” wasn’t so much ketchup as it was an Asian hot sauce.  The rice crackers were more like sesame + rice pork rinds (sans rinds) and the dip, a cashew butter, was simply a dare … who eating it would be the first to use their finger to get all the goods!

The cured chuck ribs wasn’t necessarily the most adventurous dish (a chef who I ran into later that evening basically guessed at the prep once he heard the ingredients … and he was spot on), but that didn’t mean it wasn’t a powerful bite of salt cured roe against a fine little tartare joined by beautifully shaved rib meat.  The pistachio cream on the side was kick to the ass good.  Sadly, I didn’t have the guts to face plant in to my bowl.  Thus, it was returned to the kitchen with a tiny film of delicious that should have been mine!

Dinner moved through a brisket and kimchi dish with beautifully stewed meat and little gnocchi like rice cakes.  The sirloin was thinly cut and served opposite a play on pithivier.  Pithivier is kind of like a sandwich made out of pie crust that has a lump of meat in the center.  It can be truly divine and this “pithivier” was spot on.  I use quotation marks intentionally as this pithivier was simply a trey of pie crust with one gloriously executed meatball in the center.  Infused with lemongrass, this baby purred! Or maybe that was just the lady at my side making those noises.  Who cares … it was delicious.

We wrapped our evening with a light vanilla gelato … I don’t do the desserts so it’s hard for me to really articulate this properly.  But the cinnamon chips were evident and I liked the cup ‘o dessert for its muted sweetness.

This Atlanta, is the type of thing to embrace and to do so with fervor.  It’s a great setting and is run by a fun group of people.  Don’t go there demanding formal service and don’t do it on a night you “have a show” to attend.  By the way – I don’t speak a lick of French, so I hope I’m right about that FdB stuff.