While hot dogs, hamburgers, and apple pie may get all the credit, those fakers aren’t really “American.” After all, they were invented somewhere else.  But the Buffalo wing – that’s all us baby!  So I make it my business to pound a few dozen of these genetically modified suckers on a monthly basis (yeah … I’ve long since realized that Buffalo wings come from chickens who probably don’t live a happy life).  While my doctor may not approve of this frequent assault on my body, and my conscious if often ignored, a chicken wing diet is something I speak quite highly off.

Enter Wing Factory, a longstanding Buckhead sports bar meets kids coral.  It’s a beat up business with with plenty of TVs that serves up the very definition of bar food, and for what it is … I dig it.  Sure, its often overrun with several dozen pre-pubescent bastards all hopped up on sugar packets and Kool-Aid, and the food is anything but gourmet, but Wing Factory offers me enough illicit delight that I’ll weather the ruckus every few months for some wings and poppers.

Let’s Get A Few Things Straight 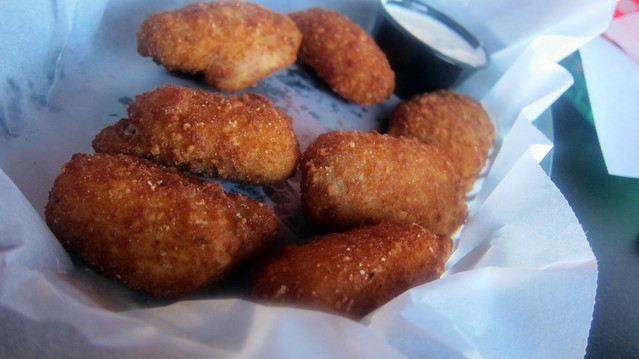 Most good Buffalo wing joints are dumps.  In fact, I can’t think of a single place (outside of maybe a José Andrés’ restaurant), where the Buffalo wing is elevated above its typical spot in the lower rungs of food culture.  Good … when I grab a basket of wings, I don’t want to sit there and pick apart their every essence, I don’t want to pontificate on some artsy fartsy cooking technique, and I don’t want to have to worry about how good of a value they may or may not be.  Of course, JA is always welcome to provide me with an exception to my rules … but you get the idea.

Wing Factory is a perfect setting to enjoy such pleasures.  The walls are covered in two things: televisions and junk.  I think there are more signs on the walls than any single person could possibly hope to collect in a single lifetime.  The tables are cheap, the booths fairly uncomfortable, and everyone is packed in like a sardine.  Thank the fucking Flying Spaghetti Monster!  This is want I want for my wing experiences.

Okay – so the environment is pleasantly low brow … check!  Then there is the service.  The truth is, I don’t know how long any single server or bartender usually sticks around the Wing Factory.  I’ve come across every personality type under the sun in the number of employees I’ve run across.  I’ve never been run off with a broom and I usually can coax a smile out of even the most dead pan of their servers … and so it is that Wing Factory does just fine in that department.  Sure, sometimes they take a little while with X, Y, or Z and maybe they aren’t as enthused as one might hope, but can you honestly blame them when they work at a place where they frequently have to account for some snot-nosed little punk whose mom tips just 10% and on food alone, even though she’s got the collective wealth of some small multi-national conglomerate?  Truth is … I almost always get really friendly and super accommodating service.  And of course – I’m at a dive bar … so who really cares?

Despite my repeat visits, I’m fairly unfamiliar with the ins and outs of TWF’s menu.  I go there for the wings and for those awesomely indulgent but admittedly from the freezer section jalapeño poppers.  The food is probably brought in by someone who peddles the exact type of product the modern food movement has taught us to shun, and it could just as easily be prepared by some high school kid who spends his break times smoking some reefer as it could by a trained chef.  Again … who cares?

If it’s deep fried and bad for you – you can probably find it at Wing Factory.  I’ve played around with Wing Factory’s sandwiches and delved in their appetizers and surely tasted some of the stuff off the other sections of their extensive menu, but 95% of the time I’ve got either an order of their jalapeño poppers or their buffalo wings in front of me.  94% of the time, it’s both.

The poppers are like tiny fried blimps of “who the hell came up with this but thank god they did.”  Unlike those shameful cheddar cheese examples served at most places, Wing Factory’s are stuffed with cream cheese and breaded with your basic crumb mix.  They’re pulled out of someone’s freezer and dropped in a fryer.   From time to time, these red jalapeños aren’t properly cooked so you kind of have a warm outside and a chilled inside – but most of the time, you’ll want your table mates to duck.  When these things are hot – the cream cheese spews out of them just like that cream puff Bluto blew out of his cheeks in Animal House.  Sadly though, they aren’t exactly spice.

Nope, for spice you’ll have to turn to the wings.  Flavor for flavor, Wing Factory’s may be the spiciest in the city – so do yourself a favor – work your way up to the hot stuff.  Trust me, I can douse my tongue with just about any conceivable form of hot sauce, and the super hot ones at Wing Factory are not for the faint of heart.

The wings are served up in those plastic baskets and come with a side of sliced carrots and celery or some fries.  Most importantly, the wings themselves are pretty good and crispy.  Even when I forget my request for a double fry, the wings come crunchy … and that’s somewhat of a surprise considering that these are decent sized wings.  Thankfully they aren’t jumbo sized as that would make the wings harder to execute properly.

As is the case with a lot of things these days, America’s drive for excess has resulted in the Wing Factory offering a zillion different wing flavors.  Admittedly, I’m in no position to really discuss the long list of *specialty* flavors offered.  I don’t fuck around with that stuff – I’m a traditional wing man – which means I like my hot sauce and I don’t look for infusions or anything like that.

The basic foundation for WF’s sauce is a no frills combination of butter and vinegar.  It means the wing sauce is wet as opposed to gooey and that bites of chicken at the Factory won’t make your hands all sticky by the time you’re finished with your meal.

The straight up flavors are mild, original, hot, inferno, or habañero and all of them taste relatively the same.  The included black pepper in the sauce mixes well with the butter and vinegar, so bites definitely have some real flavor.  Things will begin to taste a little different by the time you get to the higher end of their hotness scale, but you’ll probably be too busy trying to put out the fire in your mouth to really worry about the taste.  I must again warn you to tread carefully with the level of hotness.

An order of wings at The Factory isn’t the cheapest option in town, but that’s not a major concern.  Once you get up into the bulk levels, you’re looking at approximately $.75/wing, and that’s a reasonable price all things considered.

I don’t go to Wing Factory to elevate my level of being, I go there to satisfy a craving and it has yet to truly disappoint in that regards.  My suggestion to you is to go in with humbled expectations and walk out with a pleasant surprise.  As it stands, Buckhead’s Wing Factory is one of the handful of spots around town that I use to get my fix of those fried little chicken drummies that drip in Americana.