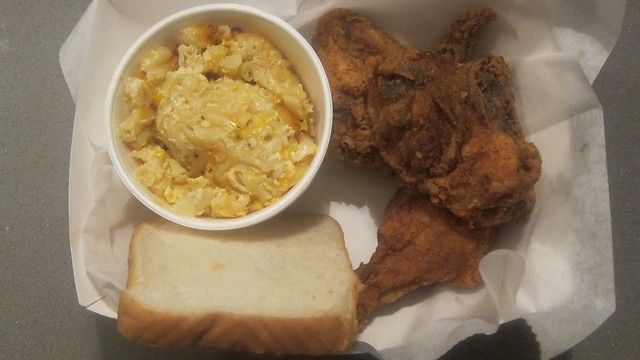 A family of Atlanta chickenistas has moved into the little Westside building that briefly housed LeRoy’s Fried Chicken.  While this restaurant also focuses on fried bird and the street sign and building are basically as they were before, there are several distinctions between the patriarchal Curly’s Fried Chicken and 1021’s former tenant.

First, Curly’s doesn’t focus on the locavore movement (aka – no “gourmet” Springer Mountain chickens).  Second, in lieu of lard, Curly’s uses canola oil to fry their product in.  Third, the prices at Curly’s are more inline with those of most chicken shacks (LeRoy’s was hella expensive).   There are a handful of other differentiators, but those three points alone establish a very different playing field for Curly’s, and by consequence, produce a very different type of expectation for a meal at Atlanta’s newest fried chicken parlor.

It’s All In The Family

Curly is Steve’s dad and Steve is one of the family members who operates CFC.  Somewhere in there is room for Ashley and Shay, though I have no idea who is responsible for what and just how many members of this family actually work at Curly’s.  The menu makes reference to no less than ten people whereby each has a favorite dish … or perhaps each is a signature contribution that the named party created.  I don’t know, point is – it’s a family affair, though their surname isn’t known at this point in time.

Ordering: Harder Than It Should Be

You still make your way up a ramp to get to the ordering pad, whereby you’ll have plenty to look at.  In place of LeRoy’s highly polished menu, Curly’s has put up a white board of unadorned food listings that not only include fried chicken and sides, but also fried shrimp, white fish, desserts, and a rotunda of drink options.  A few combinations have been made available, but the point here is that despite what is actually a pretty streamlined offering, ordering at Curly’s isn’t as easy as it should be.

Much of this is attributable to the lack of design in the menu.  Poor spacing and uniformed fonts make it hard for the eye to process the variety of choices.  It may seem like an odd thing to make note of in a food review, but as anyone in the design and print industries will tell you – design matters.  Design doesn’t mean things need to be fancy or overloaded with colors – but certain principles should be followed to help people make sense of the information they’re presented with.  It’s also unfortunate that the personal touch of including Mel’s name along with the green bean listing suffers because of the way the information is presented.

Also, there’s something unnerving about the combos.  Perhaps it’s the listing of 4oz Cole slaw that confuses.  The sides otherwise come in 8oz or 12oz and for a slew of different prices dependent on the item and size of choice.  They’d be better off just offering two small sides in the combos.

But strip away the bad print job and what you’re left with is a decent amount of choice that doesn’t stretch into too many culinary categories.  Pieces of chicken can be ordered in most any which way and for no more than $3 a piece (most are $2).  There’s a bulk discount, but bottom line is you should expect to spend somewhere between $8-$10 per person if you eat some fried chicken and include a side, drink, and TIP with that order.  If you happen to want some white fish or fried shrimp, things get prohibitively more expensive.  A small order of each comes in at over $8 (and for not that much food it seems).  Those prices will hopefully drop. 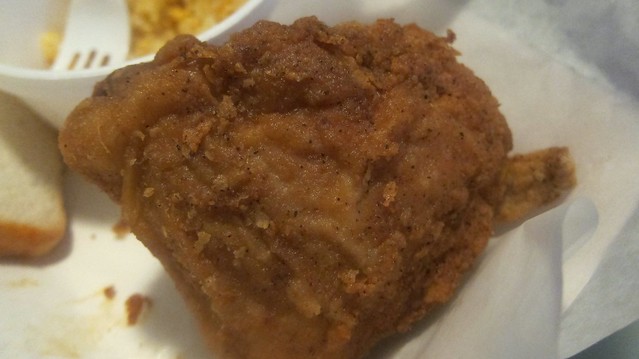 It’s hard to draw any real conclusions about the delivery service at CFC.  I suspect that the intent is to fall somewhere in between the fast food and made to order ends of the spectrum.  Ahhh … the fast casual restaurant they be.  In my one stop, I got my food lighting fast.  This was most certainly attributable to the fact that a good bid of chicken was already fried and under a heating lamp.

I received my bag lickity splickity, pulled up a stool, and dug in to see what was what.  I started with an order of five fried shrimp ($8.50).  It was supposed to be for six, but I got five.  A forgivable oversight (if not for that price point!), the shrimp were a pretty stupendous flop regardless of price.  The batter was just way too salty for their little bodies and I was disappointed that the included sauces were packaged.  I don’t recall what brand Curly’s calls upon for their dipping sauces, but they were flat and lifeless.  Things like cocktail sauce are super easy to make and rarely can you buy one that tastes better than the really good homemade stuff.  For a place that espouses the family, that would be a great thing to offer – it’s cost effective and easy to do.  More importantly, the shrimp themselves were a sickly sight and I wouldn’t have been comfortable with them for 1/2 the list price.  I don’t see anyway for Curly’s to put out a better product other than to get a better shrimp and a much livelier but less salty batter.

As for the chicken itself, it’s a take on a Southern classic.  Curly’s wisely avoided using massive cuts of chicken to fry (that’s a big no no in the world of good fried chicken), which makes it easier to for them to put a signature spin through seasonings.  Excessively large bird pieces make it difficult to focus on the flavors since you have to do so much tending to the chicken just to make sure it gets cooked right.

Like Jimmy, I’m betting this is a simple flour dredge around a bird that was not brined.  While you certainly can produce a pretty clean chicken fry with a mildly brined product, not brining (aka soaking it before you cook it) a bird will make it much more likely that the inside will remain moist and wet and not drift towards greasy.  So that’s two BIG positives for Curly’s to take comfort in.

The chicken had gotten a little overcooked (perhaps due to a heat lamp that was running a little too hot).  It was far from bad but didn’t come close to some of the other one off examples available around the city.  The crunch of the crust wasn’t really there on account of the fried chicken getting a little too much steam; but, it was not overly thick either so initial cracklings soon gave way to a softer bite.  Too salty to be called “ideally executed,” a hint of pepper rounded out the flavor profile.  I’m sure there are other seasonings being called upon, and perhaps this was simply an off batch, but I didn’t see some great hiding under the surface.

I made it a point to get a side of Buddy’s secret sauce.  It wasn’t wholly different than a glorified sweet and sour sauce.  While it cut down on the saltiness of the chicken, it was a little too syrupy and thus makes me rethink my previous comment on making sauces in house.

Before I got out of there, I dug a little into my mac and cheese which performed well enough to justify its $3 tag.  Not particularly moving, it’s a basic example of you melt a few types of cheese over some noodles and there you have macaroni and cheese.  I’m again guessing the heating lamps kind of killed this – it wasn’t over cooked, but the sparing parts of crust that I had hoped were more prevalent had softened.

Save for that silliness with the shrimp, my first meal at Curly’s was fine enough.  I don’t think the sky’s the limit for this place.  Even so, a little adjustment to the batter would really help.  Perhaps playing with the cornstarch or introducing some nice buttermilk would help … so too would a little kick from something like a dash of cayenne.

I appreciate the attempt some make to bring something “wholesome” to market – but ultimately – we go to restaurants to eat and because of that – we want them to taste good.  So I’m plenty okay with CFC not getting caught up in any trend.  Curly’s may not have blown me out of the water, but it didn’t send me “figuratively” screaming for a refund.  I’ll certainly go back as I almost always do and I won’t yell at you for seeing what it’s all about.  Truth be told though, if you are going to be in Westside and looking for this type of food … I’ll send you to Carver’s unless I turn up something of note during a future trip to Curly’s Fried Chicken.