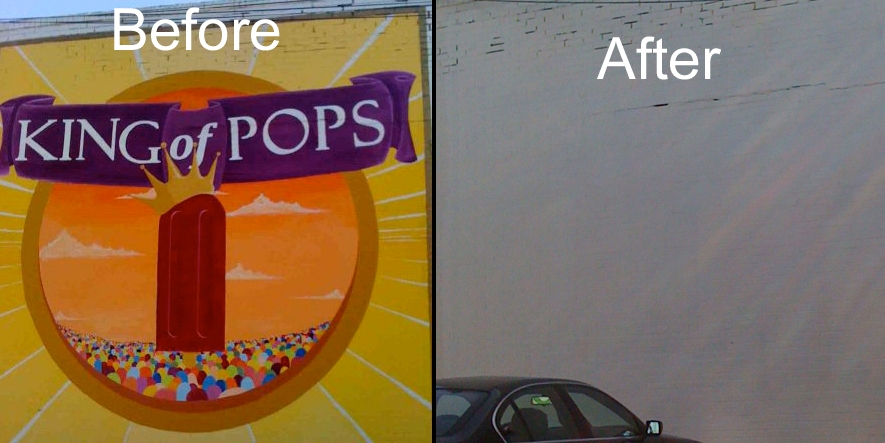 Consider this post a big middle finger directed at an unidentified party.  According to RestaurantsATL, the super awesome mega-sized King of Pops mural is apparently gone, up and vanished like a fart in the wind.  The mural was located in the parking lot of Buddy’s Gas Station, which has long served as home base for The King.  Smack dab in the middle of Poncey-Highland, this mural served as a call to arms … it said: “Stop, look at me … there is deliciousness to be had.”

It was fun, it was colorful, and it made me happy and it made the people happy!  According to RestaurantsATL, this is the work of our fabulous city government.  They are of course, enforcing some very serious, totally legitimate city ordinance. Interlude:

Gas Station Employee: I’m starting to picking up your sarcasm.
Richard Hayden: Well, I should hope so, because I’m laying it on pretty thick.

Mayor Kasim Reed (@KasimReed) happens to be a pretty big supporter of street food … so I hope this catches his attention and something is done to restore order in the universe.  If something doesn’t happen in the near future – don’t be surprised if an online petition shows up on this blog!

On a more positive note, I recently noticed that KoP is now at Sheik Burritos … you can get all your KOP news via their twitter feed and their website.

UPDATE: Steven Carse (the King himself) will be on TV tonight – you should be able to catch him on Channel 36 during the 10 o’clock showing and 11Alive sometime between 11pm and Midnight.

[image with permission from RestaurantsATL]