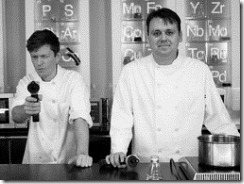 When discussions of deconstructed food and molecular gastronomy occur, rarely do concepts like sustainability come to mind.  People (like me), who eat food from the admittedly quirky chefs that make these whacky concoctions, are almost always focused on the hedonistic experience of this type of consumption.  This is obviously not lost on Homaro Cantu and Ben Roche, who serve as the executive chef and the executive pastry chef of Moto Restaurant in Chicago respectively {Homaro is on the right}.

Moto is one of the Windy City’s most notable Modern American restaurants.  At this internationally acclaimed establishment, Cantu and his team drop some mad scientist methods to produce food that’s been torn down and built back up in ways most people could never execute (let alone imagine).  If it wasn’t previously obvious that guy’s like Roche and Cantu are concerned with the food system beyond how they can use it to blow your mind as if you’re a character in Inception, it should be obvious now.

The duo showed up at a Ted event to talk about how they practice food science.  Part of the 10-minute speech is sort of an introduction to deconstructed food and to Moto’s modus operandi.  However, the conversation slowly drifts towards sustainability, health, and things of that nature.

This food isn’t necessarily for everyday consumption (though R&C would say it can be), and many people find it down right strange … but this talk is fabulous introduction to ways in which food can be truly used as an art form of science.  Given the public’s concern with the food economy, you’ll begin to see how these crazy whacky foodophiles might actually be on to something.  As Cantu postulates, using science as the basis for food preparation would allow the food industry to eliminate sugar from confections and sodas and replace it with fresh fruit!!!  So not only would it taste better, but it might actually be good for you and more cost effective.

Oh, and for you reality TV fans, Top Chef Texas’s Chris Jones makes a cameo.  As the chef de cuisine, he’s involved with many of the experiments that the kitchen staff run.  You’ll see him in the back of one of the slides and a little action shot as he slices his neck with an imaginary knife, surely at the behest of his superiors!

For more on the topic, see the art of deconstructed food.