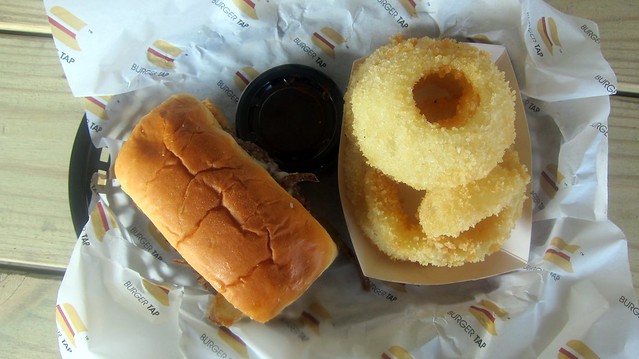 It seems as if Atlanta’s culinary milieu dictates the popularity of the burger.  It’s very much a straight out of Field of Dreams situation, whereby “if you build it, they will come.”  So it happens that Burger Tap, Morningside’s brand spanking new restaurant, is serving burgers.  Elephant, meet room.

Aside from a few blurbs on various Atlanta news sites, Burger Tap opened last week a little under the radar.  A quasi-derivative of yogurt shop chain Yoforia, Burger Tap is attempting to put a spin on Atlanta’s unavoidable food trend.  As I was in the hood during their earliest of days, me and a few compadres decided to stroll in and see if Burger Tap had anything worthwhile.  After a single meal, things seem promising.

Stop With The Sales Pitch

Let’s get this out of the way … I’m a big believer in letting food speak for itself.  In the ultra-competitive market of meat patties, restaurants are taking every opportunity to make themselves sound more important than they are.  Burger Tap is as guilty as anyone in that regard.  For brevity’s sake, I’m just going to tell you what needs to go and save the why:

First, stop with the executive chef crap (same goes for you HD1/Flip/Farm Burger/etc…).  You’re a burger joint, and no matter how talented the guy making the burgers is … you’re at best a grill master … not an executive chef.  Second, stop acting like your stuff is made from recipes that need to be locked in a bank vault.  It’s elitist, and elitism isn’t in burgers.  When someone asks who makes your buns … tell them.

Housed in the old Caramba space, there are few signs that hint at what was previously ensconced at 1409 N. Highland.  You’re greeted by a short little ramp and immediately presented with an ordering station + beer tap (yup – that name’s no accident).

As your eye scans left, you’ll see most of the space’s 52 indoor seats.  They in turn are somewhat hidden by modernistic steel slotted piping.  You look past the wood booths and you’ll catch a word cloud wall next to the entrance.  Even if it wasn’t the result of a scientific study, it seems an accurate portrayal of things you might say if burger is on the mind.  All in all, it’s obviously the result of someone’s vision and a hint that more of these spots are on the way.  Rounded out by the frosted glass logo and cute people running around in Burger Tap tops, it’s a lively space that’s, for better or worse, unlike any of the other nearby restaurants in Morningside.

Get A Burger, Take A Buzzer 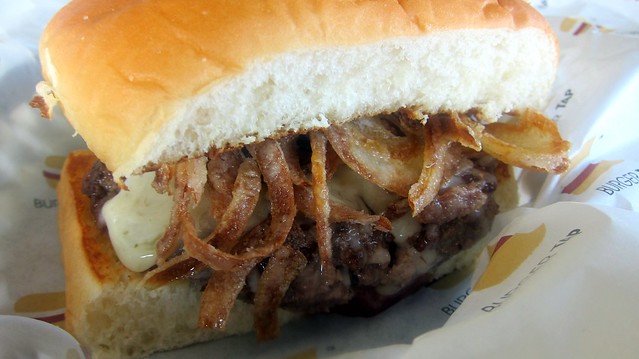 Burger Tap’s menu is a beautiful assembly of just four burgers, one grilled cheese ($2.80), and five sides (mostly $2.80).  Sure, you’re not going to find every twist and turn, but you can find your classic and get your fill of adventurous (Truffle, Sesame, Southwestern).  I know people are adamant that choices galore reigns supreme … but the reality is that short and sweet is the tortoise to the hare.

There is also a 25 deep list of beer on tap.  I’m admittedly under equipped to comment on these offerings, so I’ll leave it like this: it seems like a very nice selection (all are around $4-$6), and where excessive choice is the arch nemesis of a food menu, an expansive beer selection seems like a good thing.

The individual burgers offer no interloping of flavors, and this is critical when you have limited options.  The patties are a mix of brisket, short rib, and chuck.  Using those three cuts is kind of like saying to a young teenage boy: I’m gonna give you your pick of whatever Victoria Secrets model you want and then letting him have all of them.

Portioned out somewhere around 4 to 5oz. (I’ve heard both numbers used), you’re going to be handing over just $3.80 per meat sandwich (+$2 if you get the truffle burger).   So bottom line, if you take a burger, a side, and a fountain drink, you’re out of there for $9 to $10.  A very reasonable proposition.  If you upsell yourself on beer, you’re probably in the $13 to $15, again – very reasonable.

My one suggestion for the BT gang is that they pay careful attention to seasonality.  I saw tomatoes on the menu, and for a place that clearly wants to tell you how good their product is … getting tomatoes in the midst of Winter isn’t the best idea.  Also, I saw no pitcher options for beers.  They should remedy that – especially since you’ll have to get back in line refill your suds.  Still, the ordering is a winning proposition of clear and concise choices in a no-frills setup.

Once you’ve figured out what you want, this fast casual restaurant will hand you a faux cell phone, leaving you to fill your beverage container and find a seat.

It was a nice day out, so we found a spot outside at one of the three communal picnic tables.  There we chatted and dallied as we waited for our order.  As the menu told us, there are no heating lamps and everything is made to order … so the 12-minute wait wasn’t a shock.  I wonder how ordering times will go as the crowds come.

I went with the glitzy and glamorous Truffle burger with Gruyère cheese, crispy onions, garlic aioli, and truffle glaze.  I also supplemented the burger with an order of the onion rings.  Presented on a butter toasted bun that sort of looked like a hot dog bun if that hot dog bun was made for a burger, I’d say the shape of the burgers might mislead.  The burgers are plenty reasonable in size, but something about the presentation might trick your eye into thinking you’ve just been given a glorified slider.  You haven’t – and now you know.

The bun itself sat around an ample stack of crisped onion strings, was spread with a touch of garlic mayonnaise, and held well as the flat topped burger with its sheen of Gruyère and thin film of truffle oil did its best to destroy the vessel.  The meat, which was obviously cooked on a flat top, garnered just a bit of crust and was full of juice … thanks in part to its constituent cuts of meat. 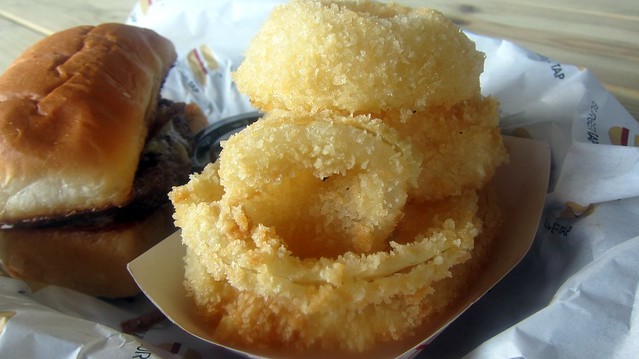 The onion rings, with their largess like price tag of $2.80, were not particularly notable but far from bad.  Amply covered in panko batter, there just isn’t much to say other than: If you want onion rings, and this is what they will always taste like, then you shouldn’t worry about the cost.  The side of chipotle BBQ sauce was devoid of heat and loaded with sugar … that needs to be remedied.

Maybe in all my years of eating, I’ve become somewhat hardened, so I didn’t expect much.  Maybe then, I can say that I was perhaps more surprised than impressed with the burger.  But the reality is that this was a really good burger that I’d gladly want again should circumstances allow me another meal at Burger Tap.

I knowingly indulged in a burger that did not allow the best opportunity for the meat to shine, so more visits are certainly in order for that reason alone.  But I was happy.  Meanwhile, I was also happy to see Mellow Yellow in the soda fountain.  Having seen things like cheerwine show up in taps elsewhere, I’d love to see Burger Tap focus exclusively on less pervasive soda options.

Despite its place as the latest foray into the overdone, Burger Tap cannot be immediately dismissed. Every establishment deserves the opportunity to make or break itself, regardless of how omnipresent their concept happens to be.

While most of Atlanta’s boutique burger chains have done very little to impress me, I was pleasantly surprised by Burger Tap.  They say the devil is in the details, but for once, those intermittent frustrations did little to detract from the overall experience.

My first dance with this casual burger bar was wildly better than my first date with the still craptastic Yeah Burger or the “I’m too sexy for my shirt” Flip Burger Boutique.  Truth be told, it was better than any subsequent experience at either of those two joints.  So let’s see if Burger Tap can overcome its late to the game presence and somewhat out of place feel given its location, and settle in as a consistent and pretty damn tasty place to enjoy.  If it holds up like this, it shouldn’t have any problems beating a dead horse.