Writing about Café Todahmgol in Duluth is an exercise in frustration … I just get hungry.  Perhaps that is why I’ve never spent the time to relay my thoughts on this tucked away Korean restaurant way up yonder.  You see, as you begin to reach the Northeast border of Atlanta, most often identified by Interstate 285 and Spaghetti Junction, Korean restaurants become as common place as even the most inundating of fast food chains.

Though these spots are everywhere, it seems as if most “ethnic food” passionistas continually identify just a handful of restaurant when discussing Atlanta’s best Korean Barbecue.  Restaurants like Han Il Kwan, Hae Woon Dae, Honey Pig, Iron Age, and Myung Ga Won repeatedly get a nod.  Cho Sun Ok, Sun and Moon Café, and Star Daepo also get mentioned.  That’s frankly just the tip of the iceberg.  I’ve been to all of those places, some several times over, and yet I’m constantly disappointed that Café T, one of Atlanta’s best Korean restaurants of any discipline, is buried beneath a heap of the less worthy.

Why It’s Not More Popular

I first started going to Café T in late ‘08 around the time Spark Plug gifted this restaurant to Atlanta’s bleeding edge food fans.  Sparky, aka Chow Down Atlanta to you folks, has almost always been my partner in crime during meals at T [when she realizes that I’ve been there without her – there’s a good chance I’ll end up with broken knee caps – girl be vicious].  While it’s henceforth been adored by critical consumers, a slew of circumstances have kept Todahmgol off most people’s tongue.

Up until just recently, Todahmgol has been a fortress of Korean culture.  Save for an exception or two, the place was staffed by people who spoke less English than I speak Korean.  By extension, T was and is patronized by people of a similar background to the staff.  This tension also had another victim.  Todahmgol never saw the need to offer their English speaking visitors any lifelines.  With a menu written exclusively in Korean, most of us from the Deep South were forced to order Russian roulette style (a mix of pointing at pictures or at menu listings that we were only guessing at).  I’ll throw caution into the wind without so much as a blink … but I know that’s not true for everyone.

Perhaps even more of a detractor is that Café Todahmgol is stationed in a little strip mall on the north side of Pleasant Hill.  So this remote location, relative to those urbanites from inside and around the perimeter, makes it hard for most to frequent.

All in, this combination of factors created the perfect storm which has kept many people away despite the really tasty food.  Luckily, the dam has started to crack, and changes inside Café Todahmgol have started to take shape that should encourage a visit from a more diverse cross-section of folks.

What Has And Has Not Changed 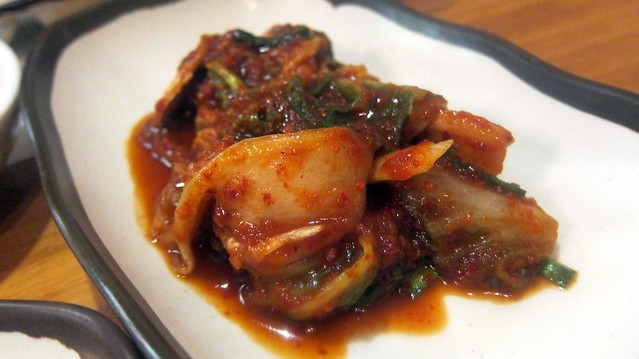 Todahmgol is a rectangular room that probably seats around 60 to 80 people.  I’m not sure as to the total since tables are divided amongst little cubicles and closed off booths.  The space is decorated much in the way many Korean restaurants are dressed, with beer girl posters, lots of Korean writing, and plenty of hanging stuff.  Because of all of these sound dampeners, I’ve never found the restaurant to be particularly loud even though it’s often really busy (especially late at night).

There’s been a lot of mention of the smoke that the patrons generate.  I honestly can’t speak to that.  I don’t puff on the little white sticks of murder and yet I’ve never given it a second thought at CT.  Moreover, I’ve been there a few times with an asthmatic friend.  He’s hypersensitive to tobacco smoke and I’ve never seen him puff an inhaler while there.

Perhaps the most important factors for anyone willing to venture to a place of this type is the staff and menu.  Slowly but surely, staff members who understand and speak English (such as the totally awesome Sue) have started to show up tableside.  This helped lessen any potential apprehension some of my fellow diners have had … even if we could read what was in front of us, that most of the servers can acknowledge orders in English is surely of relief.

The most notable change has only just come to be in the past few months.  The menu is now full of English and so even if you do end up with one of the servers who still doesn’t speak your language, you can merrily smile and point assured of the fact that your request was properly received.  Yeah, the location still sucks for many – but it’s right in the area of Iron Age and Myung Ga Won – so if they can get some Americano love – so to can Café T.

For anyone who spends any amount of time reading Atlanta’s most frequented food blogs, there’s a good chance Korean Barbecue is as familiar as any cuisine.  Korean BBQ is the American idealization of Korean food in the same way Japanese cuisine is often relegated to the idea of sushi.  KBBQ is so pervasive that we often forget the other wonders Koreans prepare. Be that as it may, Café Todahmgol specializes in KBBQ.

[If you need to know more about this KBBQ, hit up Gene’s 16-step guide to eating samgyeopsal]

Todahmgol offers soups, seafood options, and a few other odds and ends … but the vast majority of your attention should be on the grilled proteins.  Most will set you back between $13 and $17, and occasionally that’s a cost/person.  But you can certainly feed two people from a single order of chicken gizzard thanks to the slew of banchan (little side dishes) that shows up.

More often than not, Spark Plug and I dive right in with the “bring it until you burst combination option.”  For $17/person, you can fill up with as much pork belly, rib-eye, and pork neck you can handle.  Regardless of what you want to order, make sure to include some of the pork belly.  It’s the thick cut kind you can use to beat someone across the face with and leave a mark … so it tastes great and is multi-functional.

Your table will soon be filled with a table-top gas-powered grill tray, a platter full of your requested meat, and roughly ten little side dishes each containing a special little Korean creation.  There are mainstays in this lineup that include kimchi (pickled cabbage), doenjang (soy bean paste), gireumjang (rock salt + pepper + oil), powdered soy beans, bean sprouts, and two bowls of piping hot soup.  The rest come and go depending on the season (yes – that’s right  … this restaurant is SEASONAL!!! Oooh … ahhhh … AMAAAZIIING).

If you’ve heeded my advice and selected the combo – you should go nuts for the bulgogi (rib-eye).  At it’s best, it’s juicy and full of natural oils that should pretty much justify the price of admission alone.  Even if you let it sit too long on your grill – you’ll be alright.  It won’t get tough (unless you murder the shit out of it), it will just get crunchy.  The samgyeopsal (pork belly) is hands down my favorite sampling of such indulgences anywhere in the city.  It may not bring you that moment of bliss, whereby your eyes close and your belly just gurgles in anticipation and excitement.  But there’s no shame in that.

As you mix and match your meats with any one of the bright, freshly made fixings (of which the paper thin sheets of pink pickled radishes are perhaps my favorite), don’t forget about your soup.  The gyeran jjim (steamed egg soup) is like a breakfast omelet in a bowl.  The budae jjigae (spicy soup with tofu and meat) kicks your tongue with the type of heat that subtly realigns your taste buds.

I’d be remiss (translation: subjected to the wrath of Chloe) if I did not mention how good the soy bean paste is.  She deftly describes it as “not as soy-ee beanie” as it is at other places.  Whatever your poison, press on until you’re in need of a wheelchair. 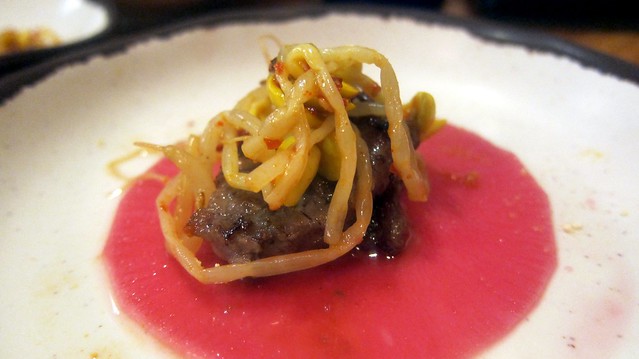 You may wonder why this is still considered a first impression.  Well, I have yet to venture outside of Todahmgol’s soups and barbecue; so for lack of a better option, I just shoved this recap into the 1st Impression category.

You may think I’ve just told you this is the second coming; after all, it’s my favorite Korean BBQ in the city.  However, let’s not fool ourselves.  I’m not ready to lay prostrate to gods and argue that Café T is the end all be all of Korean food.  Mrs. Kim (one of my many college moms) wouldn’t allow me to be so lenient.

Things aren’t perfect here.  The food elicits a comfortable warmth and makes me go mmm, but it’s not transcendent.  Service has it’s problems too.  Though acceptable given the cultural circumstances, you can often be left alone for far too long.  I’ve also seen items left off an order more than a few times … so keep a watchful eye.

But the food is consistently very good, and Café T is remarkably familiar from visit to visit, and that in and of itself is to be appreciated.  In many cities across the US, Todahmgol would maintain its stature.  So if you ask me, I’ll tell you to make the drive to Café Todahmgol at least once, you won’t regret it.