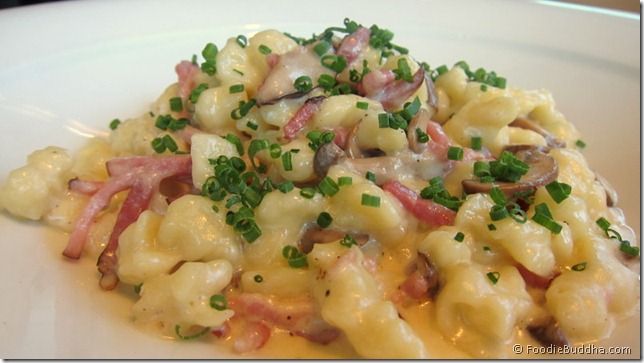 Things we learned on the latest edition of Top Chef Texas: 1) Apparently grandfathers made absolutely zero impact on the lives of their offspring.  2) Bravo TV now relies upon the most uncreative group of twaddlers for their inspiration.  3) Patty LaBelle can still belt it out.  Other than that … not much.

Still, the season dragged on and we all watched as our brain cells died as we all seemed to loose a little more of our life’s than the 60-minute commitment seemed to require.  In any event, if you did power through, here are some of the odds and ends that qualified for a brief mention in this weeks What Was That Ingredient?

Albumin
Okay, not technically an ingredient, this got a bunch of chatter last night.  It’s actually a water-soluble protein and when it gets really hot – it congeals and pushes out of things like fish.  The way to get ride of it, simple: don’t cook your fish too fast at too hot of a temperature or brine the fish before cooking.

Burrata
An Italian cheese that is really just extra awesome mozzarella.  The outside is a shell of mozzarella and the inside is a cream and mozzarella mix.

Cocoa Nib
When you take cocoa beans and roast them, you end up de-shelling them.  The nibs are the de-shelled beans.  Bam!  It’s the basis for chocolate so you can imagine what it will taste like.

Hon-Shimeji
Hon-shimeji mushrooms are a type of shimeji mushroom.  Shimeji are often called beech mushrooms, they are tiny little suckers that grow in clusters.  They are bitter to the taste unless cooked.  Otherwise, they are kind of nutty.  If you’ve ever wondered what “umami” tastes like – shimeji mushrooms may be one of the best ways to see.  They provide a wallop of umami.

Za’atar
It’s a condiment made from sesame seeds, sumac, salt, and a handful of other spices.  It derives from Middle Eastern cuisine and is often used as a seasoning for meats and veggies.  You often use oregano and thyme when making Za’atar.  It’s very herbal and might remind you of a toasting fire.

Adobo (Filipino)
Not to be confused with the sauce a lot of Spanish/Latin American food is put in (think chipotles en adobo), Filipino adobo is a dish (meat or seafood) marinated in a vinegar, soy, and garlic sauce that is then browned in oil.  Sam Sifton put up a good article on the stuff.

Bibimbap
This is a smörgåsbord of Korean food.  It’s a bowl of warm rice topped with chili pepper paste, sautéed veggies, an egg, and sometimes even meat.  You then just mix it all together and chow down.

Galbi Jjim
Another Korean dish, Galbi Jjim is a braised short rib that’s been put in a soy sauce and includes things like radish, gingko nuts, shiitake mushrooms, and carrots.

Spätzle
Spätzle is a European egg noodle that’s especially popular in the Bavarian part of the world.  It’s soft and often toped with cheese or something of the sort.  And that version from Gruner in Portland was delicious.

Alright my much appreciated readers, you are now more prepared than ever to go out and seize the world.  Have at it!