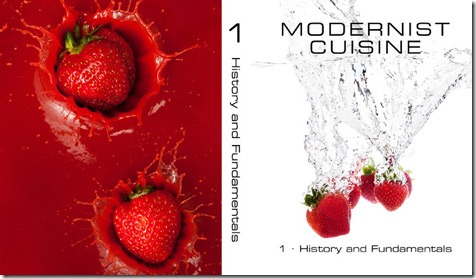 After a few weeks off from the drivel that has become Top Chef Texas, the show returned last night desperate to find a new villain, but this isn’t a typical review series, so I’ll leave that to others to elaborate on.

Anyway, this 80-minute extended edition went through all the hoops of classic reality TV and ended just before the new day arrived.  I didn’t get to it until the wee hours of the morning, but I was still bright eyed and bushy tailed ready to see what was what.

The episode’s two challenges were as opposing one could imagine.  The quick fire was all about deconstructed food (which I’ve previously explained) and modern techniques.  The second half was dedicated to barbecue and all of its classic glory.

As it happened, most all of the What Was That Ingredient? action took place in the earlier moments of the show.  Read on to see what funktastic attempts the contestants made at impressing Nathan Myhrvold, who literally wrote the Modernist Cuisine cookbook. [A hefty investment for anyone looking to explore it]

Maltodextrin
Maltodextrin is one of those “you’ll see it all over the place” sort of things when it comes to modern cooking.  It’s a starch and in its “natural” state is a dried powder that’s white.  It’s like a “healthy” alternative to natural cane sugar since it has less sugar.  In a world where people ignorantly run for the hills anytime they hear the word additive, maltodexterin isn’t anything to be feared.  It’s made from natural stuff and is perhaps a good thing to use compared to many other “all natural, wholly organic” blah blah blah stuff.

Miracle Berries and Fruit
Miracle fruit comes from West Africa and eating it will change the way things will taste for you.  The most notable impact is with sour things (think citrus).  If you snack on some lemons after pounding some miracle berries, you’ll think you were eating a sweet fruit.  You can find them in tablets, but the best way to try these out is with freshly grown stuff.  Just don’t put the berries in the fridge or cupboard as they’ll loose their effectiveness (which happened the first time I tried them).

Tōgarashi
Togarashi is a Japanese word and as such, when used in English, the translation isn’t always clear. The short short version is that togarashi = capsicum = chili pepper. So if someone here says they are using togarashi, they are *probably* using any one of a handful of chili peppers. At the very least, the idea is that it’s spicy.

Burnoise
Take something, strip it … then dice it into tiny cuts … done.  Think celery.

Quilling
Thanks to the internets for this one. Here’s what wiki had to say:

use of strips of paper that are rolled, shaped, and glued together to create decorative designs. The paper is wound around a quill to create a basic coil shape. The paper is glued at the tip and the coil shaped, these shaped coils are arranged to form flowers, leaves, and various ornamental patterns similar to ironwork.

In last night’s episode, someone quilled a raviolo … though I don’t exactly understand what aspect of quilling was really invoked.

So that’s about it. If my dry humor was lost on you – I wasn’t actually at my best while watching this episode, so it’s entirely possible that I left out plenty of stuff that should be included.  Regardless, that’s what I snagged … let me know if I missed anything glaring!