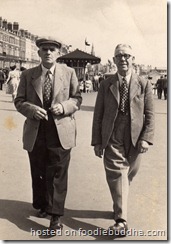 It’s like 10:30 on a Friday night, I’m home … getting ready to head back out for the evening.  While I wait, I’ve decided to check and see what’s abuzz on the interwebs.  I came across a post by Scott Henry (@ScottTheHenry) over on Creative Loafing.  The article, posted yesterday, is a lamentation on how many restaurant patrons have showed their inner dick wad with their threads (my words not his).  You just can’t go anywhere and have a special night that requires the patrons to participate in the experience at the same level the restaurant’s have to.

This really hit me about a month ago, when I picked up a lady who I was taking out for a one of a kind evening … she walked out, my jaw dropped, and “Daaayyyyaaaaam” followed as an internal monologue.  Girl was excited because we were going to a special meal and wanted to dress the way she probably felt (save for the fact that it was with yours truly).  Mind you, I didn’t look like a schmuck (or at least, no more than I usually do), but I wasn’t worthy in that regard.  So my nice but mundane attire just further exacerbated the fact that this girl was baller hottie.

We no longer have the opportunity to get dressed and do the whole “we fancy thing.”  That sucks, and it appears STH agrees with me on that point.  As I agree with him, the words that were originally supposed to fill this post have been relegated to the trash bin.  He pretty much nails my opinion.

The only supplemental comment I really have to Henry’s writing is that I believe there is a shared responsibility in this.  Part of the problem is that we as patrons don’t try and show up well dressed.  Part of the problem is that the restaurants let us.  Of course, the second a restaurant tells someone they’re being a douche – we get all up in a bustle and act like we’ve just been repressed back into the 1850s.

Anyway, go read the article … and maybe we can find some way to treat special events with at least a little bit of reverence.