It’s been a few years since I’ve said anything of substance on Sushi House Hayakawa, and that needs to change, even if my feelings towards this delightful Atlanta sushi bar have not.  Stashed away on the BuHi corridor of Doraville, I half feel like a damn investor.  Mind you, this isn’t due to some compromising relationship with owner Atsushi Hayakawa (call him Art or Haya-san).  Rather, it’s just that I’ve pumped more than a g-string’s worth of the green stuff into Haya-san’s pockets by way of an onslaught of visits in the near four year run for the restaurant.

During the unfortunate periods when my visits come at a snail’s pace, I find my impression of the restaurant seems to cool and I begin to question its place amongst the handful of better than average sushi bars around the city.  I leave realizing how fucking insane and seriously bat shit crazy those doubts are.  Each new visit washes away that pish posh and reinvigorates my warmth for the jovial little Japanese restaurant.

This isn’t exactly a retelling of a single meal and it is not a full fledged review.  Even if I weren’t in the process of revamping my rating system, I still wouldn’t be handing anything out here.  Instead, this journal bit is more of a reminder to myself why Sushi House Hayakawa continues to tug at my inner foodie as best as perhaps any restaurant in this city does. 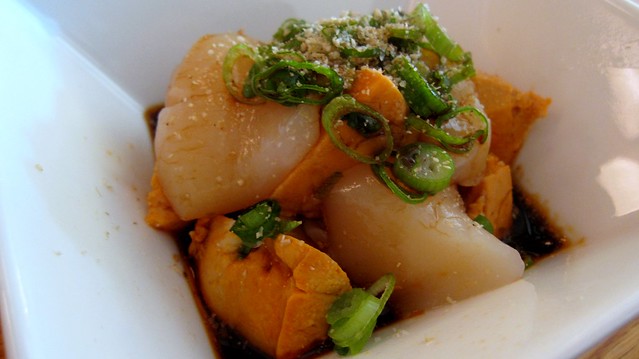 The most immediate impetus to this chatter was a recent meal whereby five of us got out of there for a ridiculous $235 (before tip) in exchange for a boat load of SASHIMI, some apps, a touch of dessert, and a small corkage fee ($15).  [The sake list rocks, the wine list doeth not. Bring your own in the case of the latter, and bite the bullet on the tax.]  We were particularly gluttonous and I’d be shocked if we could have gotten anything approaching this at any other sushi bar in Atlanta for less than $300.

The ankimo hotate (monkfish liver with sea scallops – pictured above) topped with a robust shaving of scallions and truffle oils hits my table every single time.  It’s a constantly available special and though it is better during certain seasons, it’s at worst reaaally good and usually fan-fucking-tastic.  It’s one of my favorite dished in the city.  While there may be assemblies that are more technically accomplished, and perhaps some that are more ambitious, this $11 bowl is a complete marriage of value, quality, impact, and technique.

Though the uni ikura don (juicy orange sea urchin ‘nads with salmon row over rice) didn’t make it my way this past trip … I’m pretty sure it has every single other time since I first consumed it.  It’s a briny, salty, kicked up slut fest for your mouth.  The roe is destined to burst and the uni likely to wash down as if it were a creamy cousin to the oyster.  If I am ever joined by someone – they’ll know I’m fond of them if I insist a serving of Haya-san’s ikura don makes it to their seat.

As for the sashimi, it wasn’t actually a boat load – but it was a lazy susan load of it.  In the event the intro video was a little too fast for your liking … feast your eyes on this pic of our merry-go-round sashimi behemoth: 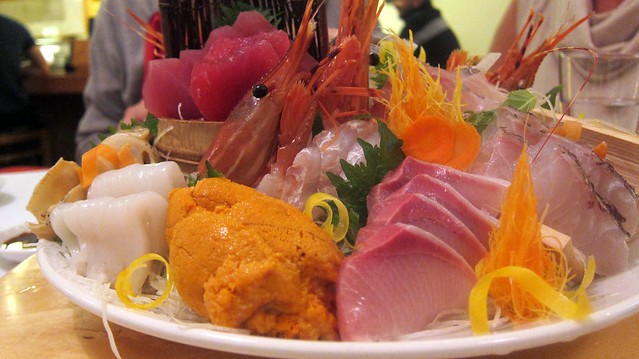 Our omakase tray (aka assembled according to the chef’s whims and not ours) was loaded with many mainstays of the American sushi diet, plenty of options for we sushi aficionados, and even a few tricks that I, despite an extensive experience with the cuisine, haven’t seen anywhere.

I was perhaps most intrigued by a kooky slice of herring that seemed to have had its roe melded to its meat.  I’m still wrangling with how to convey it’s surprise.  The quality of the fish was quite stout.  Only a few temperature mistakes and curious cuts, both of which are not totally unheard of but very much the exception, kept the meal from completely breaking down my hardened shell.  Although, given the value relative to the quantity and quality, this kicked my ass and left me happy for the beat down. 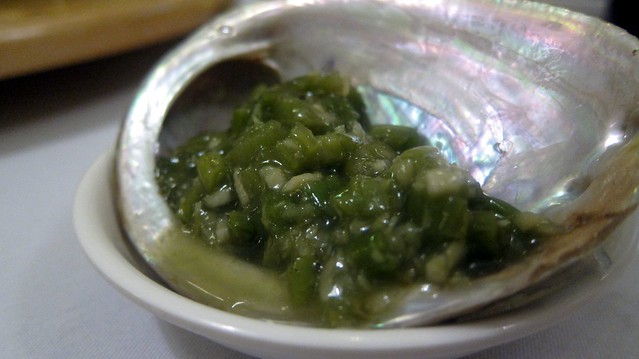 Of note, we were handed a few orders of the Haya-san’s specially hon-wasabi stem sauce (think of it like a salsa made with fresh wasabi stem).  You may need to request it.  Be warned, its aroma will flare your nostrils and careless application of such treats will leave a number of you feeling like you can suddenly breath better than ever before.  I haven’t seen anyone else serve this in Atlanta.

Deserts can be any number of things … whereby housemade ice creams are always available either with or without a mochi casing.  True to form, our order of green tea desserts served as a wonderful palate cleanser that most certainly did not weight down the belly.

Let’s get something straight: Atlanta is devoid of elite sushi.  It has been for several years and I don’t expect that to change anytime soon.  However, we do have more than a handful of competent contenders when one begins to seek out Atlanta’s best sushi.  Sure the Omakase Room at MF Buckhead offers some truly exquisite bites, but it’s far too unobtainable for the general eater and I haven’t heard a peep about it in some months. It’s probably not even an option anymore.

Then there is Tomo, which for the past few years, has perhaps carried the finest quality of fish available to ATL’s sushi going public.  Their prepared dishes comprise the most artistically inspired Japanese food in the city and the flavors are often very very nice.  However, even before the restaurant’s relocation to Buckhead, the price was and is obscene.  Sure, Tomo would perhaps be the sushi bar most likely to succeed if relocated to a more impressive food city … but ultimately, it would do so while battling for attention amongst the scraps.

Taka continues to truck along and is perfectly enjoyable and Sushi Huku certainly has its fans. In fact, it’s worth noting that the “Knows What He’s Talking About” Jimmy of Eat It Atlanta fame perhaps feels as strongly about Smyrna’s Sushi Huku as I do about Hayakawa.

I used to frequent Huku roughly 10-years ago when the eponymous owner was still in place.  I’ve only checked it out 2x since the new guys have taken charge.  I was privy to one mediocre and one horrid meal.  I trust Jimmy though – so his opinion should speak louder than mine in that regard.  Meanwhile, a service error I haven’t seen before or since left me underwhelmed when we visited Hayakawa last year.

Sushi House Hayakawa serves an odd roll.  While the food itself may not stand up to super stellar sushi offered in some big ticket cities, the restaurant is an epicenter of joy.  For comparison, consider that my one meal at the famed Matsuhisa in Los Angeles was more “sophisticated” but not nearly as tasty as most every meal I’ve had at Hayakawa.

Occasionally, I’ll find the sushi temperature just a bit off and the knife cuts “not perfect”; but, I’ve also had notable moments where my eyes shut and the world stopped [the first consumption of the ankimo hotate and the primal takedown of some uni ikura don].  Rarely extracted by a single dish more than once, when that automatic reaction is invoked – I know I’ve just found my inner peace.

I’m almost always planted at the bar, so I’m in no real position to offer an extended takeaway on table service; but, I’ve never had anything take place that made me think ill of the people.  They are all amenable if not totally great.

The man, his staff (some of whom have recently arrived from the lauded but defunct MF Sushi Bar), and the patrons make this unique amongst its cuisine competitors.  Most every serious consumer of sushi in this city probably places Hayakawa in their top 3 or 4.  But for this guy, if you called me and asked where to go get some Japanese fish food – I’m shipping you up Buford Highway via express mail.