Just happened upon the Boners BBQ page last night.  No particular reason why.  Mysteriously, new reviews have been going gang busters over the past few days.  Surprisingly, fans are either finding Boners to be the worlds worst restaurant or finding it to be god’s gift to barbecue.  Anywho, I’ve taken the time to point out some of the better commentaries.  Enjoy! [note for those reading this beyond the publication date: there’s sarcasm in them there words]

The best part: “One star, for the sheer horror of the staff and the owners. Amazing when you don’t even have to eat at a place to know it.” 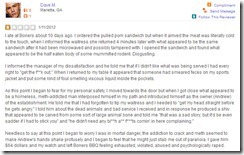 The best part: Perhaps his misuse of the word literally.  But instead, it’s really when he found a mummified rodent, got feces spread on his jacket and then was accosted by a homeless man.  As he left feeling “psychologically raped,” it’s no wonder it took him ten days to write of his experience.

The best part: I think she referenced the restaurant in there … somewhere.  Oh yeah, it’s when she says she’s never been there before.

The best part: when he compares the food to crap, cuz … ya know … he knows what crap tastes like.

The best part: Teaching her kids class and morality by reviewing a restaurant she’s never been to.

The best part: Trying to use Nazi humor to really drive his point home.  Awesome!

AND THE WINNER IS …

The best part: Well, that he said boner!