It’s not unreasonable to say that San Francisco’s Mission Chinese is currently the most buzzed about Chinese restaurant in the entire country.  Seriously!  Head cookmeister Danny Bowien has taken a dumpy, otherwise un-notable Chinese eatery, hidden himself in its kitchen, and promptly turned the food world on its head.

Right around the time I dropped in on San Fran, Bon Appetit declared Mission CF the second best new restaurant in the entire country.  By then, New York based Serious Eats had already gone gaga and the NYT had said its piece.  Long after my visit, Bowien himself showed up in Martha’s kitchen.

As is usually the case before an initial restaurant trip, I had not actually read what had already been written of  MCF.  However, by the time I left Atlanta for my West Coast trip, I was well aware of the chatter.  Mission Chinese was hot … and I knew it … and so I waddled in there (literally in fact) as the clock ticked down on my San Francisco stay.

There are plenty of elaborate explanations of Mission’s rise and Bowien’s path to cultish culinary god.  Here’s an undoubtedly underdeveloped summation:

A short lived food truck gave way to a goofy and sporadic cooking project that literally borrowed space inside of a ramshackle Chinese establishment.  The project was spearheaded (as far as I can tell) by Anthony Myint, a restaurateur who moonlights in many culinary disciplines.  Somewhere in there, Myint met and buddied up with chef Danny Bowien, a guy with a distinct sense for approachable avant-garde.

The two got cooking, the project became a full fledged business, and now, thanks to tremendous word of mouth, bleeding edge foodies rub elbows with everyday food consumers inside of tiny Lung Shang.  So yes, it’s true that you can walk into this hole-in-the-floor restaurant, order completely typical Chinese food … or you can sit and play with one of the most adventurous menus anywhere.

The Rise of The Bowien Mystique

Myint has no doubt settled in the shadows of Lung Shan’s kitchen, leaving Bowien as the poster boy for Mission Chinese Food.  Bowien himself is a bit of an anomaly.  He’s a Korean American who grew up in Oklahoma city.  He sports long hair, distinct glasses, and dresses a bit like a punk-alt rock child.  In other words, he’s the type of guy you might immediately dismiss OR he’s the type you might realize is the prototypical candidate to shock the palate.

He’s now entrenched in North California and has decided to make his name via Szechuan binoculars.  It’s widely reported that prior to MCF, Bowien had no experience with Szechuan food.  I don’t doubt the integrity of that statement … but in my “not backed up by any hard knowledge” GUESS, I think that’s an idealist’s assumption of the reality.  My GUESS goes a little something like this:

Bowien must have picked up a wok before his first day with Mission, he certainly must have had some familiarity with the flavor profiles of Szechuan, and he certainly understands cooking.  So it’s perhaps more accurate to say that Bowien didn’t have any experience cooking Szechuan in a restaurant setting.  He’s clearly too good to be some guy who was plopped into a szechuation (*wink*) without a paddle.   PS: that picture above IS NOT Bowien; it’s just one of the cooks.

To find Mission, you’ll have to look for a large yellow awning that says Lung Shang.  It’s not as dramatic as a search for pirate booty, but if you miss the awning, you’re probably also going to miss the little paper flyer taped to the window.  That sheet is the only overt proof that Mission actually exists.

The somewhat unusual needle in a haystack search aside, SF is a public transportation sort of town, so I used BART to complete my quest.  My assumption is that if you do drive, you’ll be relegated to metered street spots.  Don’t ask me – cuz I don’t live there.

Mission Chinese opens for lunch every day at 11:30 (except Wednesdays when it’s closed all day), so my arrival at 11:15 left me to an anticipatory filled and physically taxing (thanks to my already full stomach) walk through one of San Francisco’s many famous ‘hoods.  It was worth it.  While the smells of urine and waste dusted my olfactory system, the district is replete with street art and people.  Pinch your nose and take a look.

In Search of Great Food

Mission Chinese was the last meal I consumed before I headed to the airport. To fit it in, I had to make two food stops on my way over.  Sad as it may be, I arrived beat, full, and flying solo.  Keep that in mind here.

Lung Shan is reportedly alive and well as an independent business.  Meanwhile, I never caught so much as whiff of it.  The server arrived soon after I sat (if it’s not a seat yourself, it wasn’t evident during my stop).  She didn’t even ask which restaurant I was there to try.  She dropped the 25-item menu (p1 & p2) filled with Bowien’s concoctions and repeated the act at every other occupied table.  [Note: many of the items are available in vegan/vegetarian form]

The tables are faux wood, the chairs are uncomfortable, and the décor screams “stereotypical low-end Chinese.”  Something about it was so banal that it perhaps muddled Bowien’s message, but whatevs … don’t over think that.

MCF’s menu is predictable in only one sense: it’s full of the unknown.  It changes, frequently at that, and so your only assurance is that you’re eating something that is kind of like Chinese … but kind of not.  Make no mistake, nobody with knowledge of North China’s culinary gift to the world will think Mission is serving up American food.  But, the items are built from ingredients and combinations that I haven’t seen anywhere.  It borrows from the many yet is delivered through the few.  The fried rice is still fried rice, but it’s filled with tricks.  Other dishes are more whimsical, slightly left-of-center takes on Chinese grub.  Each is worth describing if for no other reason than it’s construction, but I’m long winded as is.  To put it simply: I wanted to order everything.

My body was beat and I had no support staff to help, so I resigned myself to three dishes.  One, a savory egg custard with sea urchin, cured trout roe, rice wine, and shiso ($12), called to me like no other.  It turned out to be nothing more than a cock tease.  Sea urchin doesn’t grow on trees and Mission brings in ingredients fresh.  The result is that their uni delivery for the day hadn’t arrived (even by the time I left), and they were unable to deliver this to my belly.  I should have replaced it with another sample – but my senses got the better of me.

One of my plates offered escolar confit, Chinese sausage, egg, and scallions.  The title of the dish was Salt Cod fried rice.  I saw it as a playful challenge – written to befuddle and delivered to intrigue.  While the nuanced efforts of the dish didn’t distinguish this from a more mundane assembly of salty fish, pork, and fried rice – I loved the voice.  Escolar is often mislabeled as cod.  So was this dish full of both escolar and cod? Was it just cod? Or simply some escolar?  I don’t know – and I’m not proficient enough with my taste buds to know otherwise.  But I liked the mind fuck it offered, even if the tastes didn’t scream “This is the best fried rice ever!”  There is no doubt that the salt immersed fish was no joke, so if it’s available, and you like fried rice, don’t regret ordering it (provided Bowien’s crew can deliver a consistent execution).

The other plate to hit my table was the chicken wings with explosive chili pepper ($8/7 wings).  I spied a snow capped mountain of screaming red chilis over a hidden mound of fried bird.  The presentation is surely more for show than effect, and I chuckled when I first saw it.  I’m not smart enough to know if this dish really represents the creativity found elsewhere in the menu, but I do know these things weren’t pulled from a bag and fried up without some care.  The peppercorn flavors were there, and the heat burned my tongue with pleasure.  Is it a dish that is unique to Bowien?  I don’t know.  Keeping in mind that I’m basically hitting my head voluntarily against a figurative food wall at this point in the meal … this was a competently executed plate full of heat and reasonably priced at that. 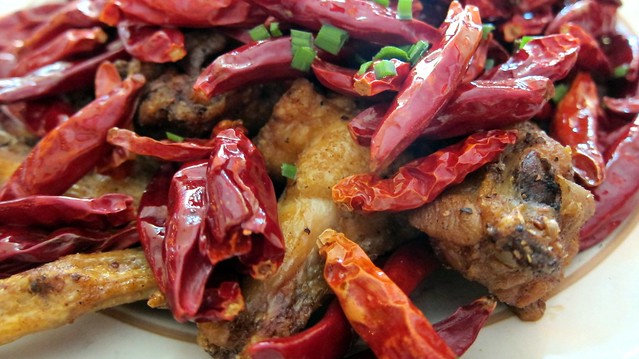 I only scratched the surface of Bowien’s food and his conceptions are adventurous.  Even though we know that my body was too beat to really appreciate what I ate, I logically deduced that what I had was as good as it needed to be, but far far away from Oh My Godness [sic].  I get a feeling that there is room for greatness in that which I did not sample … but that’s just a guess.

I ordered enough for two, so at $10/head for this food – I’m pretty damn impressed.  As Bowien’s stopover in Atlanta approaches, I’m really excited to explore what else he can do.  If I lived in San Francisco, I would certainly make it a point to play in the sandbox.  Regardless of the circumstances that dictate your visit: go on an empty stomach and get the far out stuff.  I don’t know if it will be good … but I know it will be worth the risk.