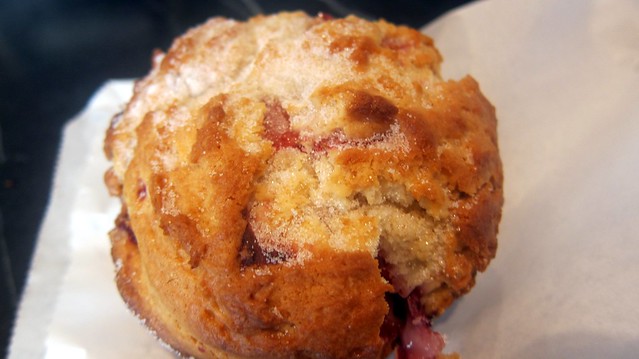 Beneath a nondescript blue awning, in a tiny and simply adorned space, sits a little sandwich shop and breakfast stop that publishes one serious MOTHER TRUCKIN MUFFIN.  These housemade muffins come courtesy of The Sentinel, a Dennis Leary [the chef … not the “Asshole”] helmed dispensary in San Francisco’s Financial District.  Take note: it took just one bite of this crusty, intensely fruity breakfast treat to sell me.

When I touched down in San Francisco in mid-September, chef Dennis Leary was not an unknown commodity.  The now mid-30s chef has been kicking out the grub at Canteen restaurant for the better part of the last decade.  To this day, I still haven’t visited Canteen; but, I certainly heard about the place from my home some 2,473 miles away.  Despite that familiarity with Leary, I had no idea of his tiny side project, the aforementioned Sentinel.  Thank to all things holy (and sage advice from my SF hostess), I lucked into a little visit to Muffin Town.

As Mr. AppleFanBoy and Lady JAQK [I hand out nicknames for the safety of those that dine with me] were not available for 24-hour accompaniment, the three of us consulted my San Francisco Foodie Map and they advised me on my quest to indulge on San Fran’s lusty offerings while steering me away from places of hype.

When the Lady of the House insisted I visit the Sentinel, I took note.  She was well aware of my desire to avoid all things pre-11am, and yet she said: “Go, get a muffin, they are awesome.”  I wonder if she knows how right she was.

Get To Know The Muffin Man

I had little more than a GPS and my friend’s words of wisdom with me when I set out to find The Sentinel.  Turns out, it’s tucked away just a few steps off Market Street, one of San Francisco’s famed thoroughfares.  In the extended shadows of the San Francisco Ferry Building, it’s the tiniest of spots with nothing more than a kitchen, a counter, and some standing area.  There’s really nothing to it beyond the baking and prep table and some subway tile walls featuring a few old school cigar advertisements.

I’ve since come to learn that Leary opened The Sentinel in 2008 in a space previously occupied by a cigar shop.  Artwork explained!  I’ve also learned that The Sentinel is wildly popular with the bustling lunch folks who at times create a line that’s worthy of a Star Wars premier.  I know nothing of those sandwiches, but logic and words of those far more accomplished than I say that they are something to beholden.

With just a footprint space and a supplemental kitchen around the corner, Leary himself took the reins when The Sentinel first opened.  He wasn’t behind the counter when I visited and my guess is that he’s now comfortable letting his pretty awesome + greet you with a smile minions handle the operation.  I see no reason to let that deter anyone. 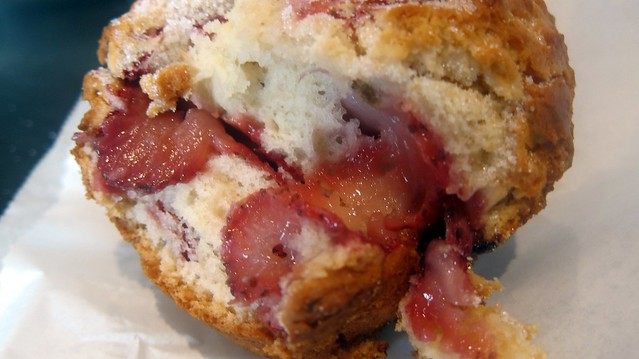 These muffins are made fresh daily, they sellout fast, and they include a leading ingredient that changes with each turn of the 24-hour calendar.  I called a day in advance for some firsthand advice, this was one mission I was not willing to fail.  My recollection of the conversation includes some suggestion that these things can be ordered ahead of time.  That’s honestly a fuzzy detail, you should explore such inquiries on your own.

With this advice in my pocket, I kicked off my last day in SF by hitting The Sentinel in the midst of the 10 o’clock hour.  It was after the breakfast rush and before the hounds of lunch descended.  I requested a muffin and to my luck, a batch had just hit the countertop.  Popped from its container, the chica behind the counter must have known she was handing me something special.  She hit me with friendly and mischievous twinkle and smile and politely wished me well in my future endeavors.

While I’m not entirely sure if onsite consumption is considered a faux pas at The Sentinel, I stepped to the side and gazed at my prize.  The red strawberries were softly puncturing the crusty armor of the baked awesomeness.  Sugar was sprinkled like fairy dust across the top and the heat was noticeable as my hands approached.

Steam warmed the air as I chiseled the shell.  There was something incredibly childlike in my reaction.  Bites were warm, the edges of the muffin crumbled, and as the interior transformed from something airy and light into something kind of gooey (but not messy), I found my happy place.  It took every ounce of internal fortitude to leave Sentinel’s space without another muffin in hand.  But I knew my stomach would not hold up with two more restaurants to hit before my visit.  I still regret that decision, but know it was the right one nonetheless.

The Sentinel: A Visitor’s Take

Writing about a one-off food experience in a town that’s anything but your home is an endeavor that just begs to be undermined.  I have no way of positively knowing if this single experience is likely to continue in the future.  But there is a tremendous amount of love for The Sentinel, and I would be shocked if my experience was an aberration.

The Sentinel is muffin’s gift to San Francisco.  My date was a jealousy inducing bread ball of desire and of all things elicit.  But despite its indulgence, my strawberry muffin reminded me most of simplistic excellence.

While the sugar crystals dusted on the top insisted that I break a mirror and some dollar bills, that’s not my style.  But just to beat a horse that is as far from dead as dead can be … I have drank the Kool-aid, I have “drank it all up.”  If pot is a gateway drug, consider the Sentinel the hemp version of my muffin love.  Visiting San Francisco?  Go.  Living in San Francisco?  See if there’s some frequent buyers program.