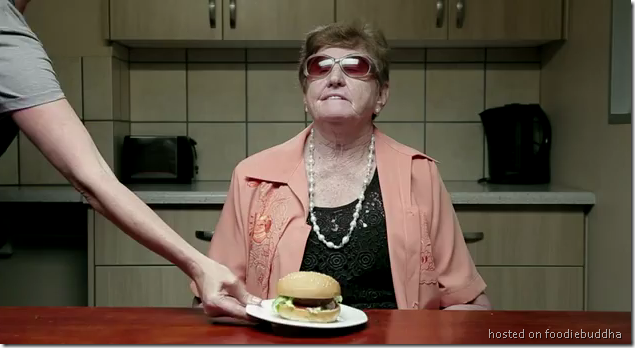 For some unexplained reason, blindness and food have popped up a couple of times in my life over the past few weeks.  It started when I happened upon a couple of blind foodies who romp around New York City.  This AM, through a series of unexplained link clicks, I hit upon this little bit of amazing courtesy of Wimpy, a fast food chain in South Africa.  I sure hope someone in the states copies this idea.

Wimpy serves burgers (you’re shocked right?).  While most people consider fast food chains the staple example of everything that is wrong with our food system, fast food chains are people too (*wink*).  Evidence: Wimpy just dropped the most incredibly cool menu for blind people I’ve ever seen (the cruel reality of that statement isn’t lost on me).

In one of the most kick ass amazingly awesomely cool why don’t more people do this because it just makes you feel better sort of things I’ve ever seen at any restaurant, Wimpy made their burgers blind folk friendly … LITTERALY.

Using carefully placed sesame seeds, Wimpy developed braille burgers whereby each bun contains a message explaining the burger found within.  This … just … fucking … rocks!  Wimpy doled these suckers out at their three largest branches as a way to promote the fact that they have braille menus.

I suddenly have a major urge to open a Wimpy franchise here in the states.  Perhaps one of the many enterprising burger joints in ATL will snag this idea and make it their own.