In the linguistic sense, I’m pretty sure that boccalone in Italian translates to “big mouth” “a gullible person” in English. In the tangible sense, Boccalone is a ragingly popular San Francisco salumeria (meat store) from Mark Pastore and Chris Cosentino that’s located in the famed San Francisco Ferry Building.  I can assure you the naming of the tiny market was no accident.

Thanks to these two dudes (who also prop up Incanto), Boccalone has become one of San Francisco’s most notable salumerias.  By no means a full-fledged Italian delicatessen, Boccalone is a nationally acclaimed house of cured meats, pig parts, sausages, and similar forms of charcuterie.  This meat swatch of indulgence is complimented with a handful of panini and plenty of take home packages.  The slogan neatly wraps it up: “Tasty Salted Pig Parts.”  That tagline alone was enough to get me in the door … but the lofty reputation alone didn’t hurt.

Cosentino and Pastore came together in 2003, when Cosentino signed on as chef at the year-old, offal infused Incanto.  With Incanto’s cured treats in high demand, Boccalone took shape a year later when Pastore secured a production spot in Oakland.  By 2008, demand from the food crazed public had reached a tipping point.  So the chef who could pass for a member of the Sex Pistols and the Silicon Valley veteran continued their partnership and gave the public a storefront for Boccalone.

The store is a meat lover’s delight of simplicity in design.  Curing chambers [don’t open them!!!!!] stuffed full of various pig parts sit alongside open refrigerator cases of vacuum packed goodies.  Meanwhile, a little merchandise is mixed in with wood boxes that hold a handful of tricked out fennel sausages and the like.

Though there is no overt pushing of any particular food ethos, if you pay attention, you’ll notice what is important to the purveyors: Boccalone is all about sustainability and humane treatment of all things edible.  While I’ll leave the debating about these controversial issues to other ramblings, I will simplify it for you like this:  If you eat meat, and you care about the process by which it gets into your belly, Boccalone espouses exactly what you seek.

The rest of the space continues along these design lines.  A couple of giant meat slicers sit on top of the steel lined cooking area.  Customers are kept safe thanks to the cedar counter which is garlanded with little things you can purchase.  It’s from this little complex that the worker bees assemble and produce the many forms of Boccalone’s menu.  It feels far more like an artisanal market than anything, and that just adds to the mystique.

A Meat Snow Cone And Some Funk

My first night in San Francisco, Mr. AppleFanBoy and I devoured the city. By Tuesday AM, I was alone and untethered. With my trusty virtual map in hand, I set off for the Ferry Building, that odd mishmash of tourist trap meets food mecca.  To walk into Boccalone might be a rite of passage for some.  For me, seeing the literal iteration simply reminded me that no matter how lofty the reputation, Boccalone has walls, equipment, and cash registers … just like everyone else.

Stomach space was already carefully allotted for so I didn’t give their sandwiches much of a look.  A retrospective glance left me with mixed feelings.  With roughly ten options to choose from (~$8-$10), each panino seems like a value (sight unseen).  However, there’s a bit of a concern.  If you aren’t familiar with all of the different types of charcuterie being offered, you will have a hard time differentiating the sandwiches.  I’m sure my mother would have asked me what prosciutto cotto and lonza are [ham and tenderloin respectively].  So not only do you run the risk of not knowing what the components are, you may not know what to expect from those flavors.  Study up or put your faith in those behind the counter.

I ordered a couple of custom designed cones ($4.50/per).  These snow cones of meat are talked about with reverence in the food community.  I think it’s cute and fun, but I care more about the shaved layers of pig than about the delivery form.  Still, props for the cones, they make me smile.

I took on a few different types of meat and by enlarge, I was satisfied and happy.  The lardo certainly caught my attention.  Lardo is fatback.  Though fatback comes from the back of the pig and bacon hails from the belly, lardo *might* remind you of a cold slice of the fatty part from bacon.  As the slippery white stuff went down, I invested in the hint of aromatics that had been used.  The mortadella, a sort of nut infused sausage, had strong hints of pistachio and a creaminess derived from the use of said nuts.  The meat cones pleased as I had expected but that sense of satisfaction evaporated as I moved on to some of their nduja.

Nduja (sounds like en-doo-ya), is a spreadable pork.  I’m not the most astute student of this quirky spreadable salami – but I know when something doesn’t seem right.  While the meat cones did little to make me question the cure times or the process, I was particularly adverse to this nduja.

Texturally, it struck me as a big bite of slimy mush.  Meanwhile, I couldn’t get past the sour beat down given to my tongue.  I later confided in Jason Molinari, a local Atlanta whiz of meats (you follow and read him right?).  He seems to share a similar takeaway, though with the added benefit of actually knowing what he’s talking about.  Molinari mentioned that Boccalone’s nduja includes vinegar.  He’s not sure why.  I tend to agree. 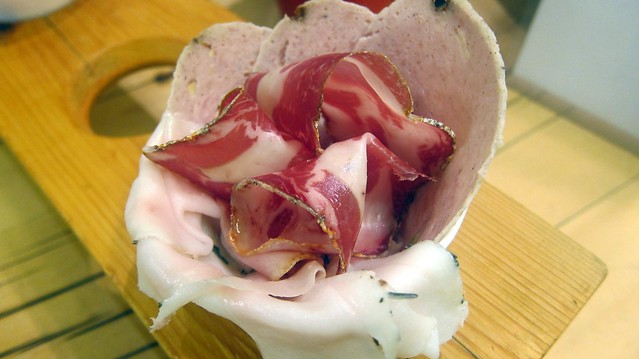 I walked out of Boccalone a fairly happy camper.  Sure the nduja sucked something major, but the little mobile charcuterie plates were an easy way for me to enjoy some fairly solid stuff.  Did any of it bring me to my knees?  Nope, but keep in mind I’ve had their stuff shipped to my door.

Boccalone is fun and offers most anyone the opportunity to learn more about charcuterie.  If I lived in the area, I’m sure I would be a regular visitor.  Sitting in Atlanta, I am glad that I have had the stuff delivered.  But Boccalone didn’t distinguish itself from any one of the fine salumerias that are found throughout the country.

As with any of these artisan meat shops, I am concerned about the barrier to entry at Boccalone.  People who operate outside of the devoted food community will find ordering to be an intimidating process.  The reality is that Boccalone exists for we food enthusiasts.  We alone can clearly sustain it, and Boccalone is clearly a place that deserves to be supported.

If you haven’t been, and you live in the Bay Area, check it out.  If you are skipping through town, I wouldn’t rearrange to get over there.  If you’re hitting up any of the food stations in the Ferry Building, or perhaps walking over to “XYZ Ballpark at Candlestick Field,” you should definitely step in and shell out a few bucks.  You’ll probably get turned onto a whole new way to eat a pig.

But if there’s one takeaway from this online entry, let it be this: Don’t let this somewhat muted response serve as a misnomer.  Boccalone is an all-star (just not a hall of famer). It’s worlds better than most of the charcuterie shops around the country.  At the same time, because it has to be compared to places like Salumi in Seattle, Olympic Provisions in Portland, and Zingerman’s Delicatessen in Ann Arbor, Boccalone doesn’t knock my britches off.