Steady Diet of Something

Archuleta and Tedford are back again with another rendition of their BATON Supper Series.  As with the first three, the duet has managed to wrangle another impressive cookmeister from lands abroad.  So check out the details after the jump and hop on the reservation bandwagon asap.

Unlike the first three dinners, dinner four will be a collaborative effort between Carlo Mirarchi of Roberta’s and Brooks Headley of Del Posto.  If you haven’t heard of either of those people or those restaurants, I can some it up like this: They’re from NYC and they are very well known foodie destinations.

A supper club that rules the roost at Gato Bizco two nights a month, BATON has been going strong since its inception.  There’s always a bit of mystery behind the endeavor and sometimes the details and specifics change between the time its announced and the day of reckoning.  However, the dinners are always cash only and the listed cost doesn’t include beverages or tip … so please keep that in mind.

The specifics of this dinner are below, to make reservations, follow use the reservations email link in the footer!  Cheers! 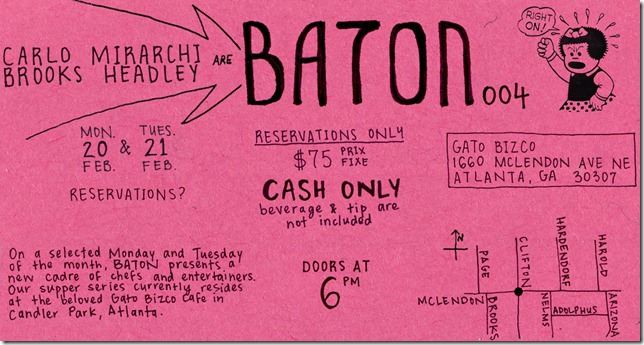