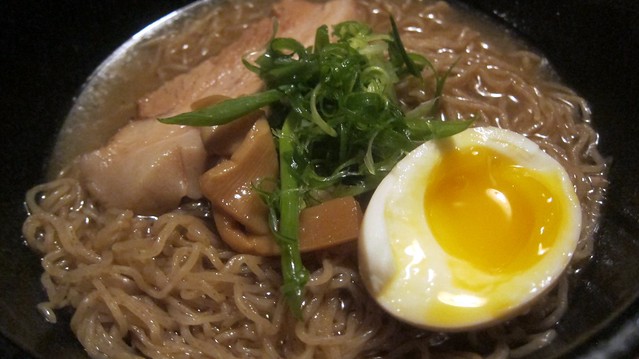 Baton Supper Series, that “on hiatus” underground supper club run out of Gato Bizco in Candler Park is revving up again.  Moses Archuleta & Bryson Tedford, who brought us awesomeness like this, mass mailed some people earlier tonight with some information.  All you need to know is in the email, which I’ve posted after the jump.

this isn’t exactly an announcement for a new BATON dinner, but it’s as close as it could be for awhile. it also means bigger things for the city and neighborhood in general. we’re very excited that some original BATON alums are starting their own nightly dinners at Gato (formerly, Gato Bizco). the soft opening is this monday and tuesday, 12/10 & 12/11.

"for your hunger, gato arigato is now open for dinner mon and tues only.
7 to 11.
accepting both the credit card and cash, b.y.o.b also.
A la carte, walk in only.
look for the sake next door at candler market.
ramen for your complexion and other japanese delicious.
Including sea bream (madai) and the true wasabi root and
yuzu kosho with nebraska pork bellies and athen’s duck egg chawanmushi.
This is our soft opening. For two weeks. Then holidays two weeks.
Then we return in jan every mon-tues having corrected all the f.U.B.A.R.
Thanks for your consideration"

we came back to town just to try it out so you know we’ll be there. we hope to see you as well!

ps – all menu items for the soft open will be priced under $10.

Given the distinct Japanese flavor of the meal, I thought it was appropriate to include some photos from the Ivan Orkin ramen dinner; however, don’t think I’m suggesting Orkin is handling this …